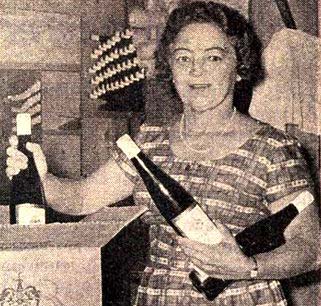 The origins of Delheim can be traced back to 1699 when Cape governor Simon van der Stel, the founder of Stellenbosch, granted his piece of land on the Simonsberg to Lourenz Kamfer, a German soldier who had served in the Dutch East India Company. The modern history of this farm, originally known as Driesprong, began in 1939 when it was purchased by Hans Hoheisen, the son of a family of builders who in 1924 had moved from the then Transvaal Province to partake in the Cape’s building boom in and around Cape Town.

Hans and his wife Del settled on the 200ha farm with its magnificent views over the Cape Flats to Cape Town and Table Mountain, some 50km to the south-west. Here they busied themselves with mixed farming, including the growing of fruit, grain and vegetables, as well as tending to a herd of cattle. Vineyards and winemaking on Driesprong, as the farm was then known, were not even a thought.
Although Del would go down in history as the part of the Hoheisen couple who in the long-term showed a greater commitment to the farm and its agriculture activities, it was Hans who at the beginning of the 1940s became enthralled by the idea of making wine on the slopes of the Simonsberg. At the time there were but a handful of wine farms in the Stellenbosch region and looking back, Hans can be counted among the early wine pioneers.

His wine-loving German friends helped convinced him that the soils and climate of Driesprong were ideally suited to growing vineyards, while Hans himself quite rightly believed that wine made on smaller estates, such as Driesprong, would be of a better quality than the ubiquitous large brands made in copious volumes by the big co-operatives. Decades later, it would be Michael “Spatz” Sperling’s exact same philosophy that would make of him a wine pioneer in his own right.

Through his own research and consulting with the famous South African viticulturist, professor Abraham Izak Perold, Hans planted Cape Riesling, Palomino, Pinot Noir, Cabernet and Hanepoot (Muscat d’Alexandrie) – some 10ha in all.

The farm’s first cellar was built in 1944 with the help of Italian prisoners of war, and Driesprong’s maiden wine was made from the 1948 vintage, making Delheim’s wine origins as a producer of estate wines among the Cape’s first.

For Hans here were no oenological and viticulture experts to refer to for help. For him as amateur winemaker it was often a case of standing over a tank of wine, text book on wine-making in hand. Due to the lack of new machinery and other materials as a result of the war, Hans and Del had to rely on their practical nature and innovative instincts, of which both had plenty despite Del in due course proving to have greater staying-power for the farming game.

The scarcity of wine bottles after the War led to some of the first vintages being bottled in beer bottles, yet some 18 tons of grapes were harvested and vinified annually under rudimentary conditions.

The wines were made, bottled and released under the names De Driesprong HOH (Hans Otto Hoheisen) Muscat Dessert and HOH Cabernet. Hans considered these early efforts to be no more than “vin ordinaires”, dubbing them “Hell Of a Hangover” – of which he could possibly attest to. Nevertheless, Hans managed to sell his wines to friends, but marketing his proud offerings presented several problems as these drier style of table wine then played very much second fiddle to the fortified dessert wines preferred by South African consumers, while brandy offered even greater competition.

But in his wife Del, Hans had a remarkable partner to support his enterprising nature. She was born in Tanganyika, today’s Tanzanzia and immigrated to South Africa with her parents after World War I. Despite training as a nurse, she had always expressed a great love of farming and when her husband acquired Driesprong, Del was determined to do all she could to make a success of their new lives on the farm.

She helped plant the vineyards, handled all farm administration and book-keeping and marketed the crops of fruit, vegetables and grain to buyers in Cape Town. At the time, Driesprong was one of the leading suppliers of maize to retailer Woolworths, while other fruit and vegetables were taken to Mowbray in Cape Town to be sold at the weekly market.

When Hans’s first wines began to appear, Del was no slouch when it came to assisting with the bottling and labelling. Her own method for attaching labels was to use an old tooth-brush to smear glue onto the paper label before setting it on each bottle by hand.

Del’s formidable role and contribution would in 1961 be honoured when Driesprong was renamed Delheim, a shortening of “Del’s heimat”, meaning “Del’s home”.

Despite the idyllic-sounding farm-life, business on Driesprong was not easy, especially during the post-War years when the world economy was trying to pick itself up after the devastation of World War II. Hans was beginning to lose his initial passion for and commitment to farming. As Spatz Sperling wrote in his memoirs: “Hans had the mind of a builder, you move in and after three months the job is done and you move on. Farming was an ongoing struggle with the eternal hope that each season, each year would get better.”

In 1949 Hans and Del visited post-War Germany to see, among others Del’s cousin Gabriele Sperling, mother of one Michael who would eventually come to be known as Spatz. And two years later the events would lead to the next chapter in the history of Driesprong. Hans and Del were in need of a young man to assist with the farming, and Michael’s mother was seeking an opportunity for her son to leave Germany for a better life elsewhere.

The Sperling legacy was about to begin.