Gewürztraminer and the Battle of the Bottle 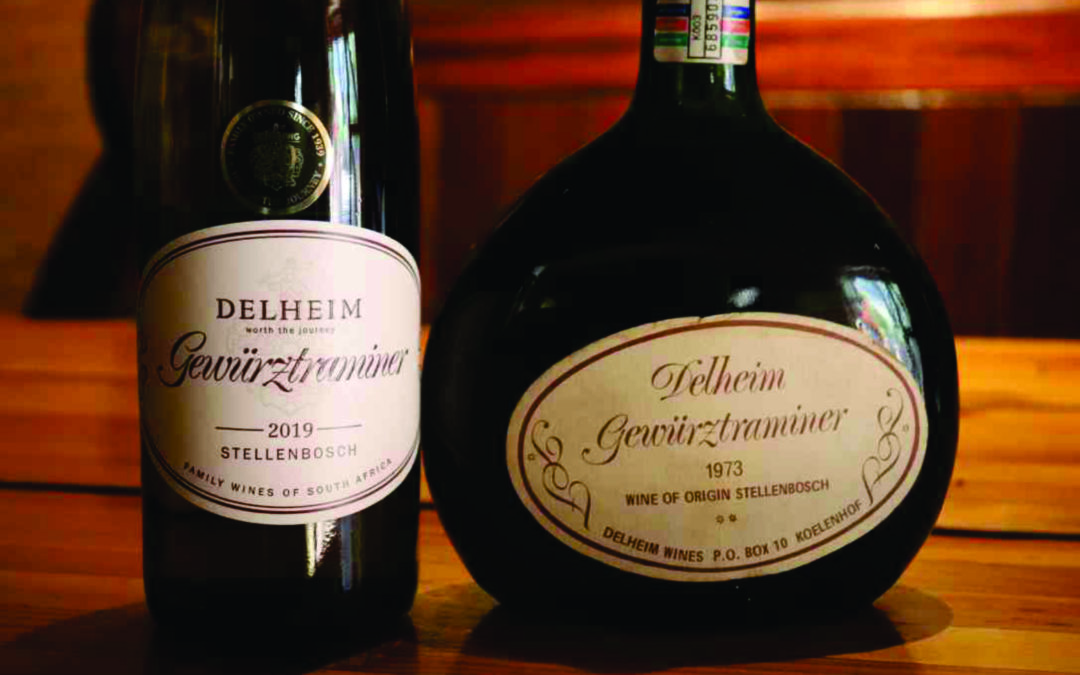 To find out what is in a name, one first has to be able to pronounce it. This is the conundrum facing many wine-lovers who embark on the process of asking for a bottle of Gewürztraminer, the lovely bright white wine of which Delheim Estate remains one of the few South African producers.

You can simply click and order without being afraid of embarrassing yourself trying to say something that sounds like it comes out of a Katzenjammer Kids comic!”

The ethos and love of Gewürztraminer run deep at Delheim, one of the few South African producers to still make this aromatic wine. Only 94ha are planted in the local wine landscape, 42ha of which are in Stellenbosch.

The origins of this grape variety are interesting and cross borders. It evolved in north-eastern Italy, on the Austrian border and is named after the town of Tramin. Fortunately the early pioneers realised that Tramin would be a pretty dull name for a wine and a grape, so the prefix of Gewürz was added, a German word meaning “spice” and referring to one of the wines many diverse flavours and aromas.

Today Gewürztraminer’s home is recognised as Alsace in eastern France, the variety having over the centuries travelled from Italy, Austria and through Germany to Alsace, which today has the most plantings.

Gewürztraminer has always been the kind of wine one expects to find on Delheim, an estate of visceral Cape wineland character cloaked in robe of European style and grace.

Spatz Sperling played a major role in introducing Gewürztraminer to Stellenbosch and South Africa, planting the variety on the slopes of the Simonsberg in the 1960s. What is interesting is that of the few local farms on which this grape is still grown, one is Simonsig, just down the road from Delheim where the late Frans Malan – Spatz’s bosom friend – also added Gewürztraminer to his farm’s wine offering.

One can just imagine the conversations and tastings these two wine legends would have when sharing each other’s Gewürztraminer wines. With Spatz no doubt needling Frans, saying that only a German from one of the homes of this wine was able to make it to its true form.

Jancis Robinson MW, arguably the world’s most respected wine critic, names Gewürztraminer as one of two wines in the world having the most recognisable aroma. (The other is Sauvignon Blanc.) And anyone who has put their nose in a glass of Delheim Gewüztraminer can concur: the scent of litchi drifts towards the senses, complemented by heavenly aromas of rose petals and, yes, a distinct spiciness.

Another feature making this variety unlike any other white grape is the colour of the fruit in the vineyards.

For although it is a pale-coloured, clear white wine, Gewürztraminer’s grapes have pink-red skins. And during the making of the wine, none of the pink pigments affect the white wine colour.

During the making of the wine on Delheim, the focus is on capturing the zest and life of those characteristic floral and spice flavours. Thus, all fermentation and maturation are in stainless steel to bring the essence of the grape to the bottle.  Gewürztraminer still has is its reputation as one of the world’s great food-wines. The acidity, perfume and fruitiness make it an ideal accompaniment to curries and other spicy dishes.

Spatz’s commitment to and love of Gewürztraminer took a legal turn in the 1970s. Up until 1971, Delheim Gewürztraminer was offered in a traditional round-shaped German bocksbeutel bottle to accentuate the European flair of Delheim. However, a major South African liquor corporate claimed  the sole right to use this bottle. Spatz, as can be expected, stuck to his guns choosing to see the applicant in court. Unfortunately, the case was unfavourable to Delheim who lost the right to the bottle and resorted to more conventional.

But Delheim had the last laugh. The modern wine industry left those round bocksbeutel flagons behind due to challenges on bottling-lines and shelf-space. Today the Delheim Gewürztraminer is far better off in its sleek, elegant bottle with the promise of deliciously cool, fresh white wine with myriad flavours and a fruit-driven profile.