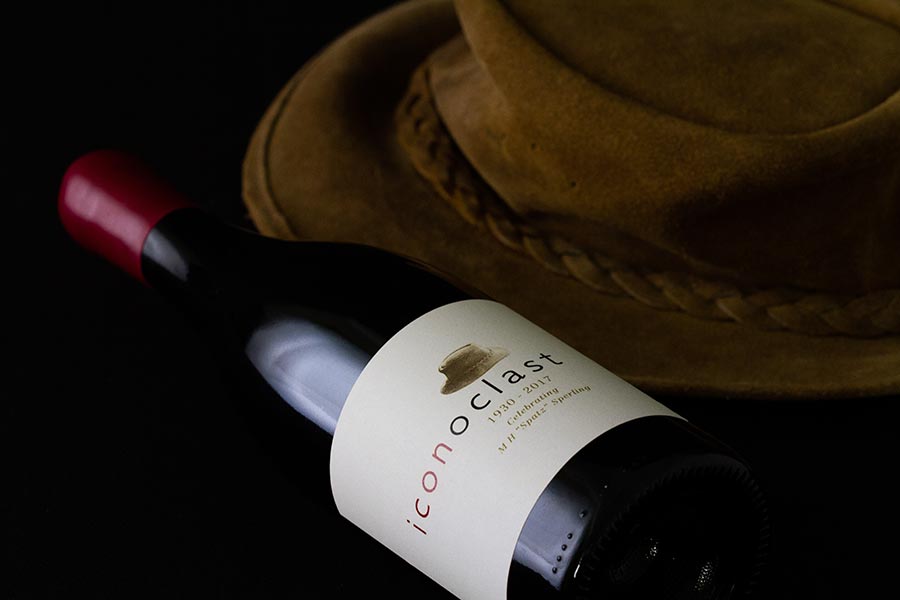 Delheim wine estate has released a once-off and super exclusive Cape Blend that celebrates the life of the late Spatz Sperling. Called Iconoclast, this wine from the 2012 vintage is a tribute to the South African wine pioneer and his fearless challenge of conventional wisdoms.

Spatz’s uncle Hans Hoheisen and aunt Del bought Delheim in 1939, so the release of this new wine also coincides with Delheim’s 80th anniversary this year.

Iconoclast is a blend of four cultivars although not typical of a Cape Blend, which commonly use South African Pinotage as the lead variety. Iconoclast is Shiraz-driven, a quirk that would have made Spatz smile not only for being contrary to the mainstream, but also because Shiraz was his favourite.

The blend is rounded off with Cabernet Sauvignon and Petit Verdot.

Spatz passed away in October 2017, at the age of 87. Challenging conventional beliefs and institutions he became a pioneering icon of the South African wine industry despite the obstacles.

The wine industry’s ultimate recognition of his extraordinary contribution came in 2009, when he was honoured with the 350 Celebration Scroll in the year South Africa celebrated 350 years of winemaking.

Iconoclast is a reflection of Spatz. Stemming from the Greek words eikon, meaning “image,” and klastes, meaning “breaker”, iconoclast is used to describe individuals – rugged individualists and bold thinkers. The logo takes inspiration from Spatz too. He was never seen without his hat and his Jack Russell, Nelson.

The wine made in his inimitable character has a dark ruby colour with an intense core. Its aroma ranges from dark cherries, cassis, blue berries, dry herbs, spice and tobacco to undertones of perfume. There’s a firm tannin structure, supported by dark fruit flavours and spice, that makes this wine an exceptional blend. Each cultivar expresses its unique character.

Respectful care was taken in its making; its fruit harvested gently by hand.

The Shiraz came from a single vineyard block of 20-year-old bush vines and the grapes loaded in a small fermenter that allowed the winemaking team to punch down the fermenting skins three times per day, daily. Natural yeasts started the fermentation were after a selective yeast strain was inoculated.

Old Pinotage bush vines planted on the foothills of Klapmutskop, known for their exceptional quality, were added too. These passed through small fermenters and were punched down every three hours to extract as much Pinotage character as possible.

The Cabernet Sauvignon came from bush vines on an east-facing slope, which allows for slow ripening and harvest at optimal condition. Fermentation took place in an upright fermenter with regular pump overs and délestage done during this stage.

The Petit Verdot grapes were also destemmed and crushed in an upright fermenter. Temperature was controlled through alcoholic fermentation to allow optimal extraction from the grapes.

In many ways, the assembly of the blend is a mirror of the historical milestones that combined and comprise Spatz’s legacy.

Spatz arrived at the Cape in 1951 as a 20-year-old from Germany to join his uncle and aunt on their beautiful farm Delheim, a name inspired from the German meaning Del’s Home. Over the next 70 years, Spatz grew the farm on the Simonsberg into one of the most enduringly popular and successful wine destinations, creating many firsts in the process.

The family-run wine farm also became a microcosm of Spatz’s visionary work in the greater Stellenbosch community and the Cape Winelands as a whole. In the days when there were few privately owned farms, Spatz, Sydney Back of Backsberg and Frans Malan of Simonsig were instrumental in transforming wine estate legislation. Together with Frans Malan of Simonsig and Neil Joubert of Spier, Spatz was a founder member of the Stellenbosch Wine Route.

“So many years were spent – almost wasted – just learning the command of local customers and skills so easily picked up by his peers who had been born into this world,” recalls Vera Sperling.  “Languages, habits, political participations – all were denied to him as he had no ancestry here and I often felt as though he did not really fit in. No wonder he was known as ‘the difficult German’!

“Much later, one realises that the art of success is to sieve out the minor points for the sake of issues of importance.”

Spatz’s unstoppable energy matched by his larger-than-life character and cheeky sense of humour made him the life of the party. He was a ready, generous and excellent friend to many and from all walks of life – much like the character contained in every bottle of Delheim’s new Iconoclast tribute wine.

The retail price of the wine is R1000 per bottle. Only 2100 bottles of Iconoclast have been produced by the Stellenbosch stalwart. This wine scored 94/100 points in the 2019 South Africa Special Report by internationally acclaimed wine critic Tim Atkin, British Master of Wine (MW).

Delheim Estate is in the Simonsberg sub-region of the Stellenbosch Wine Routes, on the Knorhoek Road, off the R44.

Cookies consist of portions of code installed in the browser that assist the Owner in providing the Service according to the purposes described. Some of the purposes for which Cookies are installed may also require the User's consent. Where the installation of Cookies is based on consent, such consent can be freely withdrawn at any time following the instructions provided in this document.

Activity strictly necessary for the functioning of the Service

This Application uses Cookies to save the User's session and to carry out other activities that are strictly necessary for the operation of this Application, for example in relation to the distribution of traffic.

Activity regarding the saving of preferences, optimization, and statistics

This Application uses Cookies to save browsing preferences and to optimize the User's browsing experience. Among these Cookies are, for example, those used for the setting of language and currency preferences or for the management of first party statistics employed directly by the Owner of the site.

Some of the services listed below collect statistics in an anonymized and aggregated form and may not require the consent of the User or may be managed directly by the Owner - depending on how they are described - without the help of third parties. If any third party operated services are listed among the tools below, these may be used to track Users’ browsing habits – in addition to the information specified herein and without the Owner’s knowledge. Please refer to the privacy policy of the listed services for detailed information.

The services contained in this section enable the Owner to monitor and analyze web traffic and can be used to keep track of User behavior.

This Application uses an internal analytics system that does not involve third parties.
Personal Data collected: Cookies and Usage Data.

This type of services allow interaction with social networks or other external platforms directly from the pages of this Application. The interaction and information obtained through this Application are always subject to the User’s privacy settings for each social network. This type of service might still collect traffic data for the pages where the service is installed, even when Users do not use it.

This type of services analyzes the traffic of this Application, potentially containing Users' Personal Data, with the purpose of filtering it from parts of traffic, messages and content that are recognized as SPAM.

How to provide or withdraw consent to the installation of Cookies

In addition to what is specified in this document, the User can manage preferences for Cookies directly from within their own browser and prevent – for example – third parties from installing Cookies. Through browser preferences, it is also possible to delete Cookies installed in the past, including the Cookies that may have saved the initial consent for the installation of Cookies by this website. Users can, for example, find information about how to manage Cookies in the most commonly used browsers at the following addresses: Google Chrome, Mozilla Firefox, Apple Safari and Microsoft Internet Explorer. With regard to Cookies installed by third parties, Users can manage their preferences and withdrawal of their consent by clicking the related opt-out link (if provided), by using the means provided in the third party's privacy policy, or by contacting the third party. Notwithstanding the above, the Owner informs that Users may follow the instructions provided on the subsequently linked initiatives by the EDAA (EU), the Network Advertising Initiative (US) and the Digital Advertising Alliance (US), DAAC (Canada), DDAI (Japan) or other similar services. Such initiatives allow Users to select their tracking preferences for most of the advertising tools. The Owner thus recommends that Users make use of these resources in addition to the information provided in this document.

Since the installation of third-party Cookies and other tracking systems through the services used within this Application cannot be technically controlled by the Owner, any specific references to Cookies and tracking systems installed by third parties are to be considered indicative. In order to obtain complete information, the User is kindly requested to consult the privacy policy for the respective third-party services listed in this document. Given the objective complexity surrounding the identification of technologies based on Cookies, Users are encouraged to contact the Owner should they wish to receive any further information on the use of Cookies by this Application.

Information collected automatically through this Application (or third-party services employed in this Application), which can include: the IP addresses or domain names of the computers utilized by the Users who use this Application, the URI addresses (Uniform Resource Identifier), the time of the request, the method utilized to submit the request to the server, the size of the file received in response, the numerical code indicating the status of the server's answer (successful outcome, error, etc.), the country of origin, the features of the browser and the operating system utilized by the User, the various time details per visit (e.g., the time spent on each page within the Application) and the details about the path followed within the Application with special reference to the sequence of pages visited, and other parameters about the device operating system and/or the User's IT environment.

The individual using this Application who, unless otherwise specified, coincides with the Data Subject.

The natural person to whom the Personal Data refers.

The natural or legal person, public authority, agency or other body which processes Personal Data on behalf of the Controller, as described in this privacy policy.

The natural or legal person, public authority, agency or other body which, alone or jointly with others, determines the purposes and means of the processing of Personal Data, including the security measures concerning the operation and use of this Application. The Data Controller, unless otherwise specified, is the Owner of this Application.

The means by which the Personal Data of the User is collected and processed.

The service provided by this Application as described in the relative terms (if available) and on this site/application.

Small piece of data stored in the User's device.

This privacy statement has been prepared based on provisions of multiple legislations, including Art. 13/14 of Regulation (EU) 2016/679 (General Data Protection Regulation). This privacy policy relates solely to this Application, if not stated otherwise within this document.

By continuing to browse or by closing this window, you accept the use of cookies.